Paintings and drawings are as popular in the 21st century as they have ever been. Video art and live interactive post-artistic works were a well-established genre by the late 20th century, which lead to talk of the death of drawing and painting. Yet this new media art of the 1990s could not work everywhere and was considered elitist by many. In contrast, paintings and drawings work wherever they are displayed, and do not need a white-cubed gallery space. With a long history and high cultural status, drawing and painting remain the popular art of our time, from across the ages, from Titian to Rembrandt to Rothko and beyond.

Many new paintings in contemporary art galleries resemble street art, with fantasy landscapes and bursts of thought and colour that you would expect to see on a street wall, making them both accessible and impressive. When postmodern theorists announced that painting cannot be a serious art in the current age, some drawers and painters took this as a freedom to provide some magnificent work, with many finding the courage to try new ideas, even if quality may be considered to vary wildly. 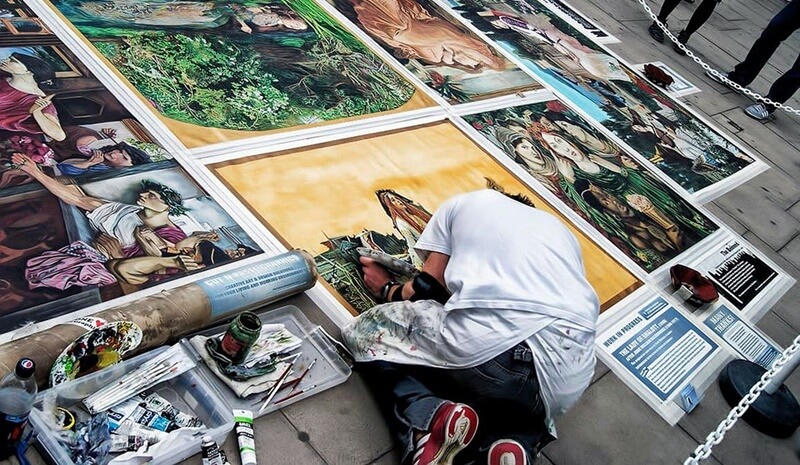 Drawing and painting in the 21st century has been impacted by the latest electronic technologies, such as digital imaging and the internet, whilst remaining a vital art. Many artists are mixing media and forms and with changes in communications and technology, artists are responding not just to local geographies and histories, but the influence of the global visual culture.

Technology has also opened the art market to everyone. It is now possible to buy paintings and drawings online from galleries and auction sites without leaving home. This includes Ebay and most auction houses around the globe. It is also possible to buy direct from the artists, many of whom have ‘Open House’ days where studios throw open their doors to the public.

Drawing and painting in the 21st century has created images of all types. Globalisation has led to a mix of influences and artistic languages that help construct identity, gender, class, power relationships, and other social and political meanings and values. This includes medicine, science, politics, consumer culture, religion and spirituality. An example of this is the collaged images of women, informed by African tribal arts, 20th-century European and American collage artists, and the latest illustrations from fashion, pornography, and medical sources that make up the work by Kenyan born Wangechi Mutu, who studied further education in South Wales and then the US. Born in 1972, Mutu works with a variety of media including painting collage, sculpture, performance and video.

Most contemporary artists do not view high art and popular culture as two separate entities. Some painters use traditional techniques to create unorthodox forms or address current social and political issues. This is particularly so for women and artists of colour who are only beginning to get a chance to impact a field long dominated by white men. Common themes include the expression and repression of female sexuality as well as inspiration, imagery, materials, and concepts from diverse areas of culture, a far cry from the history of fine art and design.

When looking for contemporary art, the best contemporary or conceptual art fairs allow you to see the latest, most highly regarded artwork of the moment. Some of the best are: